Gillette’s New Ad is SO CLOSE to Being Great, Psychologically 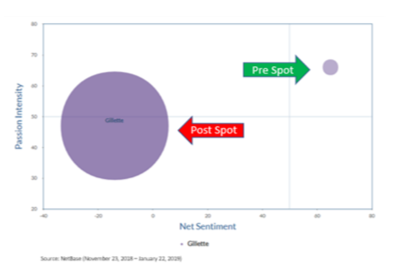 Gillette made a hard strategic pivot in their recent new ad. Unfortunately, that pivot has blown up on them, killing their online buzz. Their “Net sentiment” as measured by Intermark using NetBase, has dropped from a 65% positive commentary to 14% negative, a 79 point drop, in less than 30 days!. If you are reading this, you’ve likely seen the new ad already. If by some chance you haven’t, take a look before you read further: (https://www.youtube.com/watch?v=IPPf3sZIo-Q)

After a few years of having their market share shaved by cheaper delivery alternatives, they changed tactics. Up until now, Gillette’s product messaging focused mostly on the quality of the product. In fact, the very slogan – “The best a man can get” spoke directly to their core brand claim of having a technically superior product. However, users began to see razors as more of a commodity and were pushing back against the cost of the replacement blades, driving intense competition. Adding to that competitive pressure, was the fact that the market for razors had plateaued and is not projected to grow in the next year or so. The culmination of competition and a stagnant market lead to the somewhat inevitable change in tactics.

This change in messaging on its face seemed pretty psychologically smart. As psychologists will tell you (and most marketers), rational claims will only take you so far with consumers. It did take Gillette a VERY long way – they were number one in razors sales for pretty much the entire history of safety razors. However, to build brand equity that is not easily assailable, building a strong emotive message can be much more effective.

You can hear this thinking in the ad itself. It’s about building Gillette customers to be something greater and nobler and then associating the product, razors, with that strong emotion. It’s a model that has work successfully for other brands, like the Dove ‘Real Beauty’ Campaign, whose core message is that other people think you are more attractive than you think you are. These efforts work because they focus on a strong emotional driver and successfully elicit a strong positive emotional response. In ad agency parlance, we’d say that the “brief” was very smart. Unfortunately, the responses to the ad weren’t all positive.

There were many who voiced the opinion that some of the behaviors in the ad weren’t inherently “bad.” Many critiques felt it went a little too far. Tapping into the #MeToo movement, in particular, they dove headlong into a politically charged fight that breaks down largely along partisan lines. The early survey data and online sentiment mirror this. According to a recent Morning Consult poll, 73% of Democrats view the ad positively, but only 48% of Republicans do so. That’s a LOT of negative reaction to an ad. Judging from the comments on social media, a lot of their customers feel like they are being admonished rather than encouraged.

But the negative reaction was unnecessary. One can build to a positive emotion without starting from a personally negative emotion. Dove’s “Real Beauty” Campaign is a great example of how this is can be achieved. Dove chose a foil that everyone could agree was bad – self-doubt. In Gillette’s ad, the negative foil is behaviors, some of which aren’t universally accepted as bad. It’s almost as if the creative team felt they had permission to express political views, rather than to simply drive positive sentiment, leading to some questionable scenes and getting away from a smart strategy. It will serve as yet another example of creative done which is out-of-touch with the psychology of much of American consumers.

There has been significant publicity and online buzz from the ad – an increase of 4700% over the prior 30 day period. While this awareness lift COULD offset some of the backlashes, it may have gotten as much buzz simply by focusing on the positive emotion and uplifting part of their core demographic. The underlying strategy here is a smart one – create a strong emotion that is aspirational and tie it to the product. However, the execution felt like it got sidetracked unnecessarily by not understanding the psychology of the core of American consumers.