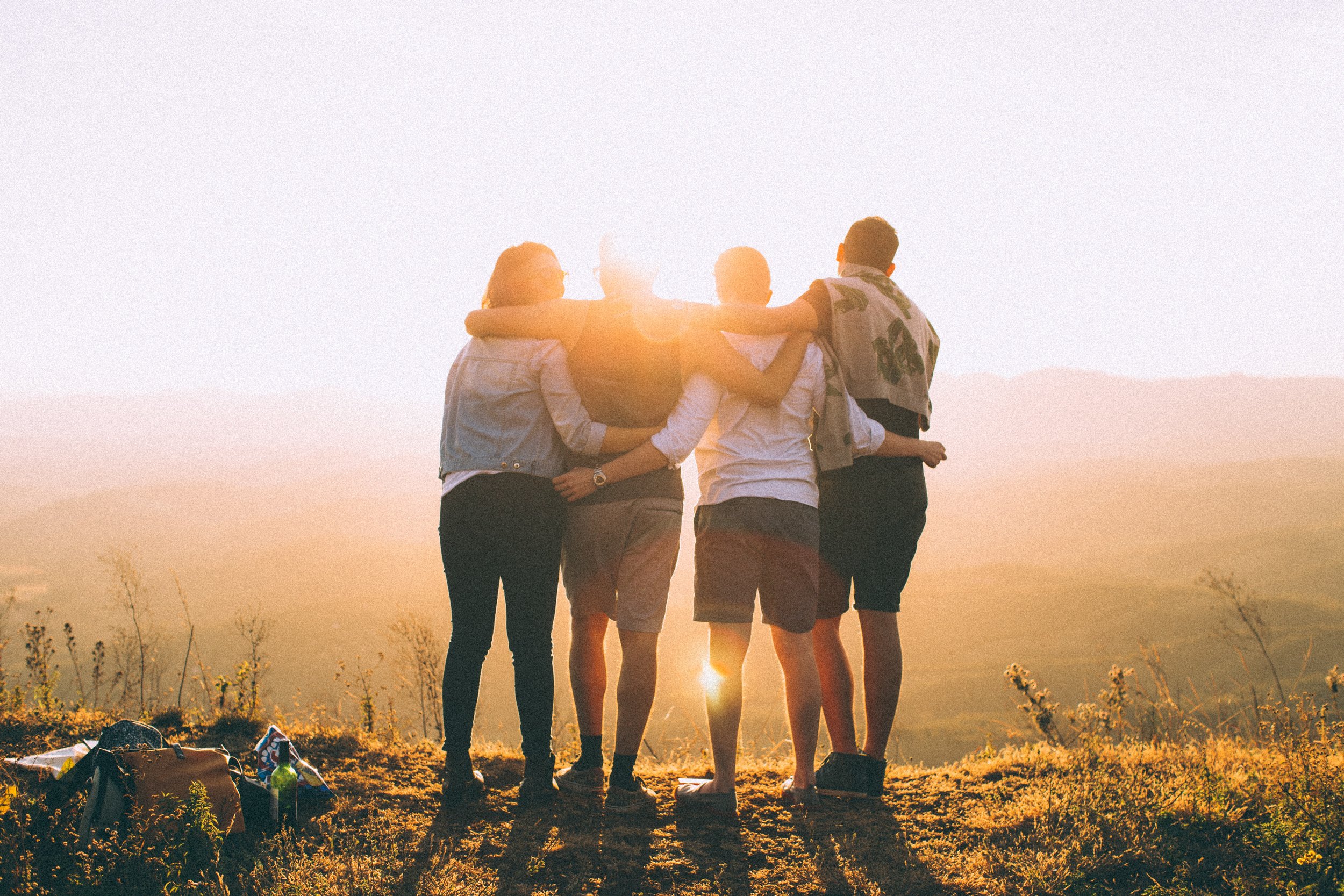 Engaging and Influencing our Social Tribes

Humans are one of the most social among all of the animal species. If we’re not spending time catching up with friends and neighbors at farmers markets, coffee shops, or pubs, then we’re likely spending time on social media, connecting digitally.

Our ultra-social nature connects us and helps us shape ideas, form beliefs, and ultimately, to shape culture. In this article we want to take a look into how this emerges in more detail. We want to understand the common psychological patterns that seem to be present when we form groups and to understand how this cements our ability to build human connection and trust.

The human social instinct is expressed in the “tribe-like” way that we interact with each other over our shared interests. And when we say “tribe-like”, we don’t just mean a bunch of people wearing white gowns and drinking Kool-Aid, nor do we mean a collection of indigenous people living in a remote island without contact from other cultures. We’re talking about the ways in which each of us—you and me, form tribes within our daily life.

We’re talking about the passionate attachment that people have for one sports team over another, the strong opinions that they hold for a Mac or a PC, or their attraction to a particular brand of car or a particular brand of pants. We’re talking about the beliefs that we share with respect to ourselves and with other individuals who use similar brands as us.

But it’s difficult to understand our own tribes, in part because the most effective tribes are the ones that you don’t even realize you’re a part of. This is what happens when you’re an active participant in human culture.

One way to think about the tribes that you might belong to would be to imagine that there’s a meetup or “fan club” three hours from where you live. Maybe it’s a group of people meeting up to knit, or to learn how to be YouTubers. Maybe it’s a group of swing dancers, craft beer enthusiasts, wine connoisseurs, classic car podcasters, or comedians. Think about what would make you want to get in the car to drive to a meeting three hours away; that might be your tribe.

Forming a Tribe Around your Brand

It turns out that there are some common features that appear when groups of people band together over their common beliefs, values, and goals. These features are described by Patrick Hanlon in his book “Primal Branding”, and they include having a creation story, a creed, icons, rituals, pagans, sacred words, and a leader.

A creation story tells people where you came from. The United States created a creation story by declaring their independence from Britain, and Starbucks coffee has a creation story as a humble coffee shop that started in Seattle. People can have their own creation stories too. Oprah Winfrey, for example, has a creation story about growing up in poverty, and Gary Vaynerchuck frequently tells the story of how he sold wine in his father’s brick-and-mortar wine store before starting his own media company.

After the creation story comes the creed. The creed can be the mission statement of the company or even the mission statement of a country, like the Declaration of Independence or the Bill of Rights. Slogans like “Just Do It” or “Think Different” are also company creeds. And an important thing to note about company creeds is that they shouldn’t simply be about having the newest shiniest product. Instead, they need to appeal to things that people fundamentally care about. They should reflect the motivating force for why the group does what they do. The creed should reflect a vision.

After the creed you have icons. Icons are symbols, sounds, things, or people that represent something larger than themselves. If you want to influence people, then it’s important to spend a considerable amount of time thinking about icons that represent your beliefs and goals, but that are also aesthetically pleasing to others.

We’re already aware of many of the icons that we see on billboards and storefronts, like the McDonald’s arches and the Starbucks mermaid logo. But people themselves can also serve as icons, like Martin Luther King Jr. serving as the icon for the civil rights movement and Mark Zuckerberg serving as the icon for Facebook. Fictional characters can be icons, like Tony the Tiger for frosted flakes, and even objects can be icons, like the white picket fences that represent the traditional lifestyle.

The next important feature that tribes have is rituals. Yearly rituals like watching the Super Bowl and celebrating Thanksgiving help bind communities together. Other rituals help mark the passage of time, like the New Year’s Eve celebration. Then there are personal rituals like weddings and funerals and mundane rituals like checking your email before you go to bed.

Rituals often help bring people together, and if you want to influence people it’s important to understand the rituals that they participate in. For example, many companies post about these rituals on social media, telling their followers “Happy 4th of July.” Savvy marketers can track the popularity of searches for “4th of July” on Google and post articles and social media posts about that topic when people’s interest is piqued.

The next tribal feature is having pagans or groups that share beliefs which are diametric or opposed to your own beliefs. Politicians frequently do this when they portray their opponent as a political opposite, but many companies do this as well. 7Up, for example, declares itself “the uncola” and Chick-fil-A uses cows to encourage us to eat more chicken.

Before you go out criticizing nonbelievers, however, it is important to remember that attacking another group can potentially reinforce the opinions of that group. We talked about this phenomenon in a YouTube video about the Boomerang Effect.

The next feature of tribal branding is sacred words. Sacred words consist of dialects or phrases that develop naturally when groups of people consistently communicate. These phrases take on a meaning that is often only known by members of the group.

Sacred words can comprise an entire language. For example, anthropologists have observed that groups often lose their sense of identity if their native language is taken away. Sacred words can also consist of the use of emojis and abbreviations like “ttyl” for “talk to you later” or “lol” for “laughing out loud.”

Understanding sacred words is important for communicating to different groups. You need to understand how your audience communicates about your product, how they communicate about their beliefs and the things they care about. And you need to follow changes in the dialect of that culture to continue to stay relevant within that group.

As you can see from the list of characteristics that emerge within tribes, the decisions that drive our connection to others is often based on something more complicated than logic. It’s something that we might call intuition, emotion, or instinct. It comes from the gut.

Given these considerations, it’s important to appeal to people at a more basic level. You need to appeal at a level that engages the parts of the brain that are directly connected to emotion.

That’s why you can’t just make the shiniest product with the highest resolution and the largest thread count. Advertising that your product is the shiniest with the most accessories appeals to our rational logical side, and we’re often more interested in products that align with what we fundamentally and instinctually care about. People are interested in ideas that help us connect with people and that help us lead a more productive and fulfilling life. Tell people a story and share your beliefs, and they’ll feel good about your product and what it represents.

When trying to engage people, it’s important to remember that the human brain is adapted to process and store particular kinds of information. Our brain is formatted to process the shapes and qualities of things and animals that are relevant to our survival. This is apparent in the earliest forms of human expression, with the earliest rock carvings often featuring animals that we hunted or that hunted us.

For example, in the book “Sapiens,” Yuval Noah Harari mentions how our ancestors carved the image of a lion in a cave 30,000 years ago. The icon of the lion is so compelling that it now appears on the front of cars, trucks, and motorcycles around the world as the symbol for the Peugeot company. Thus, the iconic image of a lion still appeals to us in a way that we can’t quite verbalize. And just as that image likely served as a symbol for beliefs and meanings for our ancestors, it now serves as a symbol for modern complex entities that we call “companies” (which themselves are a collection of people forming their own tribe) and the beliefs and values that companies represent.

Bringing It all Together

From a marketing perspective, we’re starting to appreciate that it’s more important to focus on the shared beliefs and hobbies that people have than on their demographics. Whether they are a male or female, or whether they live on the east coast, might tell us less about that person than the tribes that they belong to, such as whether or not they’re passionate about Stranger Things viewing parties or horror movie podcasts.

This perspective on marketing places an emphasis on the consumer, their interests and, ultimately, what that person or group really cares about. It’s about being sensitive to what your audience believes. You want to understand what they care about, to help each individual connect with their passion, and to connect the group with others who share their passion. You want to bring people together.

One way to do this is to create a blog or forum on your website where people can share ideas and meet each other. Another way is to create events in real life where people have the opportunity to connect, and to use that opportunity to further understand their problems and the solutions to those problems. Through these opportunities, we can help tribes find meaning and solidify their shared values and beliefs. In return, we can watch how their beliefs change, help shape their values, and ultimately, contribute to culture.

Check out our YouTube channel to learn more about tribes.